EARTH’S LAMENT via GRATITUDE, inspired by and created in homage to Mary Wigman 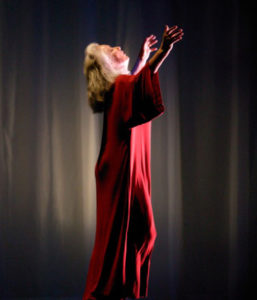 Brigitta Herrmann is a performer/choreographer/instructor. Anchored in the Mary Wigman tradition of dance, her work expresses her cross-cultural roots. She is co-founder of MOTION in Berlin, Germany and Group Motion and Ausdruckstanz Dance Theater in Philadelphia. In November of 2013 Herrmann was invited to join a team of choreographers in Essen, Germany to participate in the reconstruction of Mary Wigman’s choreography of Le Sacre du Printemps from 1957.Mary Wigman (1886-1973) pioneered German Expressionist Dance. As a dancer, choreographer, and teacher her work represents human existence through introspection, rather than ornamentation. She toured the US in the 1930s and was influential to much of Western modern dance, including through a Wigman school in New York, headed by her pupil Hanya Holm.

“The dance is a living language that speaks of man–an artistic message soaring above the ground of reality in order to speak, on a high level, in images and allegories of man’s innermost emotions and need for communication.”
— Wigman, 1966

For more on what Brigitta Herrmann is do ing in the world of dance: